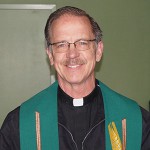 Pastor Solberg is the 8th pastor to serve during Saint Paulus’ 150 years of ministry. He was ordained into the Lutheran ministry in 1975, served several congregations in the Pittsburgh, PA area up until 1994 when he and his family were forced to relocate to the Bay area, the result of extraordinary conflict with the institutional church in Pittsburgh during the 1980s - watch 'The Fighting Ministers' documentary here. He pastored Christ Lutheran Church in San Lorenzo, CA for five years, when he was called to the pastorate of Saint Paulus in 1999. Under his leadership the congregation has reshaped its spirit and mission mostly as a church devoted to those on the margins having operated the congregation from storefronts since 2008, and now anticipates a new chapter in its long history, a new church facility from which to continue its mission.

Pastor Solberg has been married to Barbara Robbins Lind for 32 years, with whom he has raised five children. He has been a facilitator for men’s domestic violence prevention programs for nearly 20 years, has done home remodeling, and dabbles in auto mechanics. Read Full Bio

Grace Renaud joined Saint Paulus in April 2021 as our new Music Director. Born in Maui, Grace Renaud moved to Marin as a child and fell in love with the Bay Area. She attended Mills College (Oakland) for both her undergrad and graduate studies in pipe organ performance and studying under Sandra Soderlund. Before joining the St. Paulus community, Grace spent 25 years in her church music career in the Bay Area, working in glorious places like Grace Cathedral (6pm service musician and cantor), St. Mary's Cathedral (Spanish Mass Music director & organist/pianist) and St Ignatius Church. She was awarded “Best Music Director” in the TBA Awards 2016 for her work on Goodnight, Goodnight Construction Site with BACT! Grace has a special love for gospel choirs, flowers, and painting murals; and her favorite musical influences are J.S. Bach and Stevie Wonder. Grace’s specialties are bringing out the voice of the individual and blending the voices of a group into a refined expression of harmony and truth through music. She has four children and loves to dance!

Jordan Ward is the President of Saint Paulus Lutheran Church. He came to the church through its ministry among the homeless, and through the combined love of the congregation and his own character rediscovery has served the church in his capacity as President. He has guided the congregational ministry by his extraordinary commitment to its life and mission, and by his dedication and hard work, and his developing skills as leader.

Jordan also coordinates the congregation’s ministry to the HIV/AIDS community through a program known as the “Friendship Banquet”. This work has been carried forward into Saint Paulus’ collaborative ministry, SFCARES, in which Jordan serves as Treasurer and Board Member.

Barbara Solberg is the Vice President of Saint Paulus Lutheran Church. An active member of the congregation she has also participated in the development planning for the new church facility over the years, coordinated countless congregational events, acted as adviser and confidant for members, and welcomed many visitors and seekers guiding them into deeper association or membership with the congregation.

Barbara is the mother of five adult children, worked as a nurse in a number of medical fields (now retired), and has been married to and shared her life with Pastor Solberg for more than 25 years. She is a native of Pittsburgh, PA. Her additional interests include interior design and decorating, drawing, and cooking.